What is "The Internet of Things"

And How Do I Use It?

The "Internet of Things", or "IoT" is becoming a word or concept we hear about every day.  There is a fast growing industry of companies that sell IoT components, companies that research how to implement IoT, and people that want to jump in with their own ideas and products to mine a share of the future promise.  To be honest though, I still don't know exactly what IoT is, and how my customers can or can't use it to achieve their monitoring goals. This blog is my attempt to explain IoT to myself and determine how it is different or similar to what we currently do.

In a way the "Internet of Things" has been around since we started making network connections over the Internet between devices.

Eyasco started delivering data to clients using the Internet in 2003, and the principles of the company were dabbling in the concept even before then.  Back then we just wanted data - in either graphical or tabular format - to be available on a browser.  Our scheme was to use a database to collect and store the data, and to generate graphics and .csv files that could be simply referenced in a web page.  There was no database interaction - just refreshed graphics or tables each time we collected data.  We still use this concept today for publicly accessible pages where there is no authentication and no need for direct interaction with the database.  It is efficient and uses very little bandwidth - but it is non-interactive.  What you see is what you get.

At that time the SCADA industry was already beginning to offer Human-Machine-Interfaces (HMIs) via web servers built into their existing HMI software.  Initially the data was brought back to a central controller and then an online HMI was delivered via a web server.  Then the manufacturers began putting web servers in the controllers and using cellular modems to provide access to the web HMI.  This is what we call a wireless "Machine-to-Machine" application where two devices - a plc and a computer - are talking to each other over the cellular network.  From the perspective of the user they are seeing real-time conditions and able to manage and change settings from a remote location.


The addition of the "Internet" as a communications pathway allows SCADA network to grow beyond what is connectable via a hardwired LAN or within "line-of-sight" in a radio network. Many utilities are managed by systems such as this, but there are serious security considerations when implementing this type of solution.  We'll have a blog about that at a later time.

This is really the extension of what was first realized in SCADA networks - the convenience of using not only the Internet, but also other wireless networks to create connections between devices. Each wireless network extends the number of connections and number of devices behind routers and firewalls (hopefully).  For example:
The IoT engineer is potentially dealing with a many layers of communication on different networks - each with their own characteristics and communication protocols to create a web of connected devices. 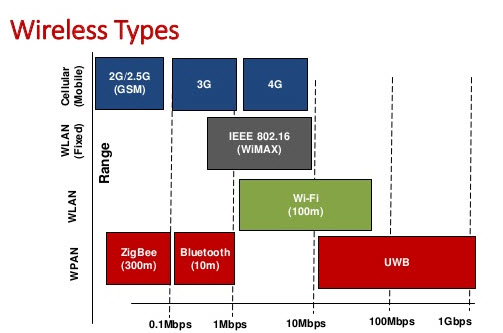 Manufacturers of Internet connected devices have found data collection easy and "transparent" so they can improve performance and supposedly tailor future products to customer needs.  The number, type and amount of data collected by manufacturers is probably unknown, but I read an article in the Financial Times that says the manufacturers of robotic floor vacuums is collecting data about floor plans (and might sell it - which is a whole other subject).  If robotic vacuum cleaners are collecting data about floor plans - you can imagine the scope of what else is being collected is quite large.  The application of IoT quickly moves into the realm of "Big Data" as more and more sensors are connected and a bigger and bigger part of the job becomes managing and interpreting the large amounts of data.

The ubiquitous presence of wireless networks has led to an explosion of companies making devices that can take measurements and communicate with cloud servers with little or no programming or setup by the potential user.  This has led to lower and lower sensor prices with increased competition and focus on easy data collection and delivery.  The quality of a measurement is secondary to the ease with which data is collected - and it has really started a revolution in monitoring for the so-called purpose of making us all smarter.  More and more companies are specializing in the end use - developing custom applications and algorithms for specific applications such as agriculture, parking, the quality of our cities air, etc.


We are seeing "into" our environment through networks of sensors and becoming "smarter" about the world around us.  The potential bad side of this explosion of sensors is that the ability to manage the quality of the information we are gathering is fast slipping out of our financial and intellectual capabilities.  More and more sensors require more and more calibration and maintenance which we are not prepared for.  Big data sets and analysis algorithms are supposed to overcome the occasional bad sensor.  The pace of technological change also creates hardware that is not designed for anything other than a short lifetime.  This makes sense in a fast-changing technology environment.  Remember the whole IoT revolution is based on sensors being embedded in every Internet connected product.  The "long-term" means until the next iteration of technological species arrives on the shore.

Jeff Schuyler
Mr. Schuyler is a Civil Engineer and Geologist (EIT, RG, CEG) by education who migrated into the field of automated monitoring and database design after years of wading through piles of archived data while developing computer models. His background in monitoring systems, systems integration and database design make him uniquely qualified to oversee the design and implementation of Eyasco’s products